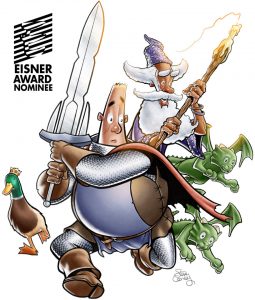 Today marks the first birthday of The Middle Age.

I started writing a list of things I’ve learned in the past year but then scrapped it as I recalled I don’t have any idea what I’m doing.

Paraphrasing William Goldman, ?Nobody knows anything…? and, as a nobody, I can confirm that.

Well, I know one thing and the past twelve months made it even clearer: my friends are the best.

I’ve started many comic projects. Some of them blew up on the launch pad. Some gained a little altitude only fall apart in the air. Some were announced with great fanfare but never left the drawing board. Objectively, when it comes to comics projects, my track record indicates that I’m anything but a sure bet.

Now, here I was I starting yet another comic – this one starring an oddly named character with a weirdly shaped head and who seemed to die on page one. And it was a fantasy webcomic – like the Internet isn’t already saturated with those.

But what did my friends do? They jumped on board and supported it immediately. Like I said, they are the best.

They made this comic strip possible and I’ll work every single day to be worthy of that friendship.