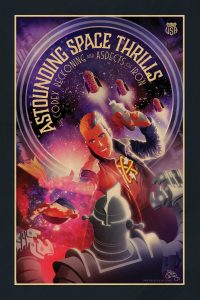 This year marks the 20th anniversary of my webcomic and comic series Astounding Space Thrills. To celebrate, I’m prepping and re-releasing the original comics with a 20th anniversary Omnibus Kickstarter planned for later this year (please sign up for my email list if you want to be alerted when the Kickstarter goes live).

Here’s a look at the cover for the new collection of Astounding Space Thrills: The Codex Reckoning and Aspects of Iron. The figure and textures were painted in Procreate with vector-drawn elements imported from Photoshop. I’m really happy with how it turned out.

The remastered web series can be read here (with updated installments on Tuesdays and Thursdays).

You can read about the original 1998 cover collaboration with Jim Steranko here.