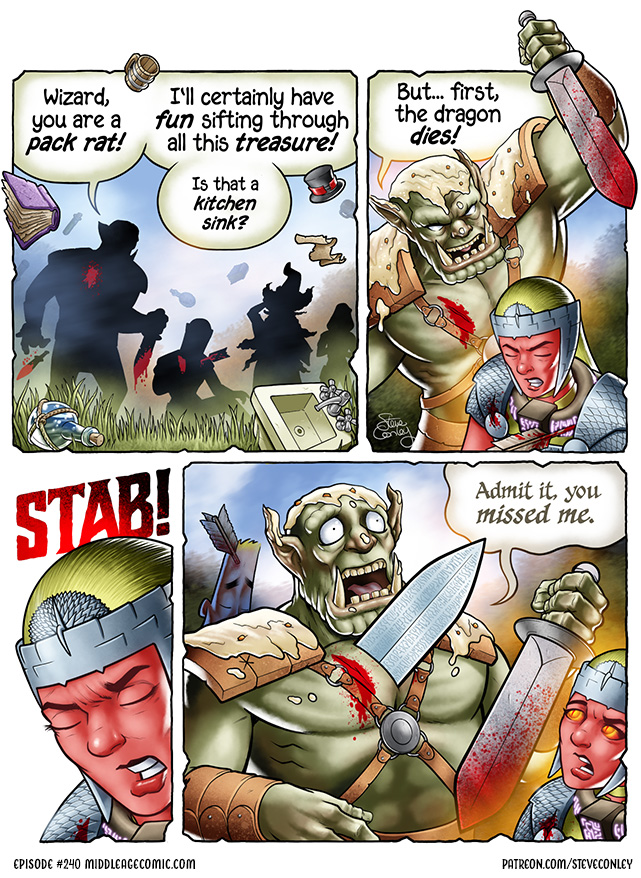 It would seem that last week’s beard-bursting installment sparked more comments than any episode so far. So many readers tried to list all the silly items emerging from Melvwyn’s beard.

I will say that the Hat With Feather was a nod to Tom Bombadil, but it could’ve been any wizards hat. :)

Shop talk: In this episode – in panel three – I had originally drawn a closeup of the orc’s face in shock, but felt it was pretty much the same expression as in panel four so it wasn’t adding much. I’m much happier with a closeup of Phosphene – now deeply red. I first saw this sort of reveal in Raiders of the Lost Ark and in most every other action movie since. :)

And some fixes! Last week, I fixed a couple of continuity issues in recent episodes and uploaded revised versions. They’re minor glitches – and in one case a clarification – but it would have been annoying if they’d made it into the printed collections. You can see the specifics in a public Patreon post here:
https://www.patreon.com/posts/orc-progress-and-46144388

Sad to see this particular orc go, they were fun to draw.