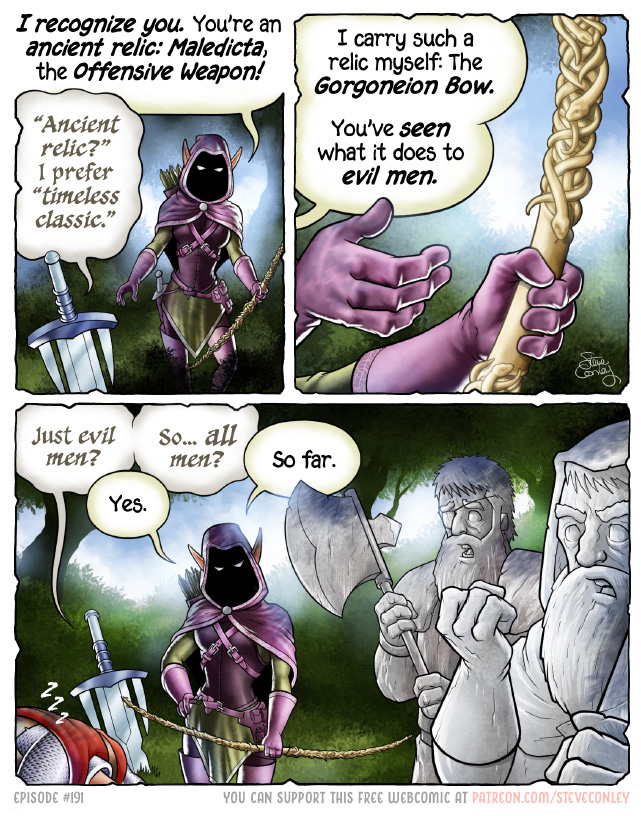 THURSDAY MORNING UPDATE 10/17: I hoped to have wrapped up episode 192 before hitting the road, but no luck. A spoiler-free sneak peek can be seen on Patreon (patreon.com/steveconley)
I’m about to head to the airport for the Baltimore Comic-Con and I’m so very excited. I’ll be sure to share a report or two over on Patreon from the show floor! I hope to see some of you there!
The Kickstarter campaign is going amazingly well. After hitting the goal in just seven hours, we’ve already unlocked two stretch goals! Big big thanks to everyone who has been able to contribute and help share the campaign!
Look for the next episode when I’m back at my desk on Tuesday!
Thank you again for your amazing support!
— Steve

This episode is interesting in that I think it’s the least our hero has appeared on the page. I’ve always tried to make sure he’s central to every episode – even when he’s unconscious – so this is weird. I’m looking forward to waking him up again soon.

BTW, I was right… Drawing that magic bow is nearly as time-consuming as drawing all that chain mail. And coloring the bow is so much more complicated – shading all those snakes. :)