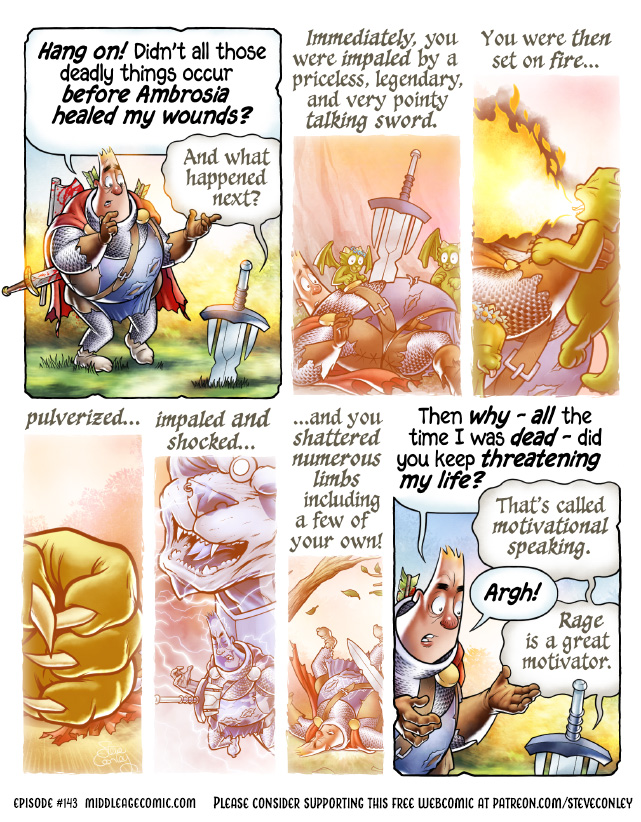 About this episode: This episode – like Monday’s – features a lot of flashbacks. This wasn’t originally the plan but I ended up needing two installments to show all the times our hero has been mortally wounded. :) I also needed this episode to explain how – after Ambrosia healed him – how he could still be dead. If it hadn’t been addressed – it would have undercut just how powerful Ambrosia is – and storywise, it would have bugged me. :)

Shop talk: In TV terms, this episode (and the previous one) might be called a clip show – where short clips from previous TV episodes are cobbled together. I usually can’t stand those types of episodes (some exceptions include a great one of Community where all the clips were from previous ‘episodes’ which never really aired.) I almost included a flashback in this strip which never happened – and Quimp would then call Maledicta on it – but I felt the space was better served with our hero challenging the Woeblade as to why Maledicta kept threatening his life. (Supporters can see the unused flashback-that-never-happened over on my Patreon page).

I thought the idea of reusing clips from previous episodes would make the production faster but nope. I ended up spending the time I saved by tweaking the color effects and the script endlessly.

Thank you all again!