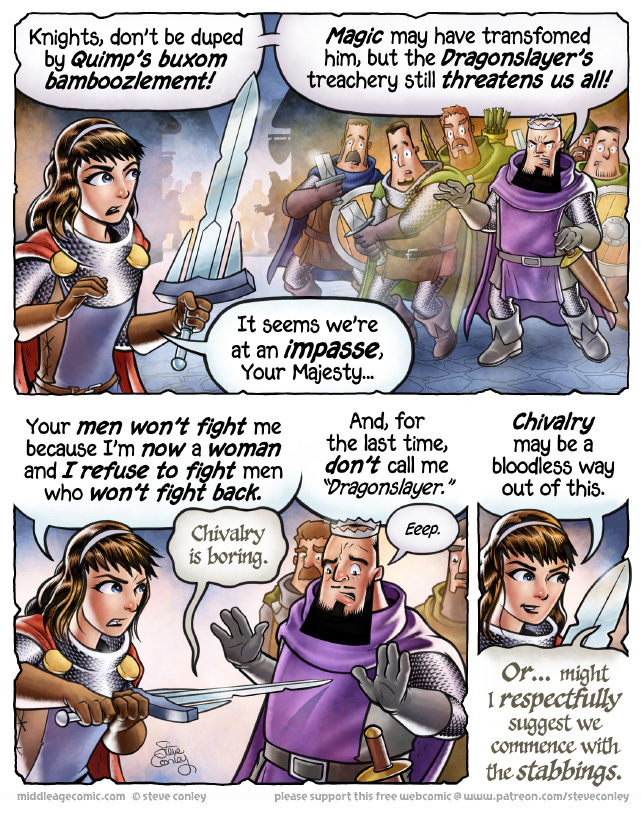 I kind of went crazy with all the chain mail texture this week. I also had extra time over the weekend waiting for a flight so I added a bit more environment to the background of panel one – the watercolor backgrounds are pretty but I feel like I’ve let the environment get a little unclear with all the portal hopping.

Special thanks to brand new patron Joe! There are now 27 patrons and we’re more than a third of the way to having two new episodes every week!

I’m posting this week’s episode a little late in the day as I took a red-eye flight back from the San Diego Comic-Con last night. The Middle Age didn’t win the Eisner Award but there’s always next year! I’m still so very honored to have been nominated and I’m still going to slap the “Eisner-Award Nominee” label on everything. :)

Speaking of awards, today is the last day to vote in The Ringo Awards. ringoawards.com The Ringos are a new award and named after the great Mike Wieringo. Mike was a great cartoonist and always very supportive of my work. Be sure to vote!

I have a lot to report from Comic-Con but I’m working on one hour of sleep and I’ll follow up this week with updates like pictures of the next batch of postcard sketches for Patreon supporters!