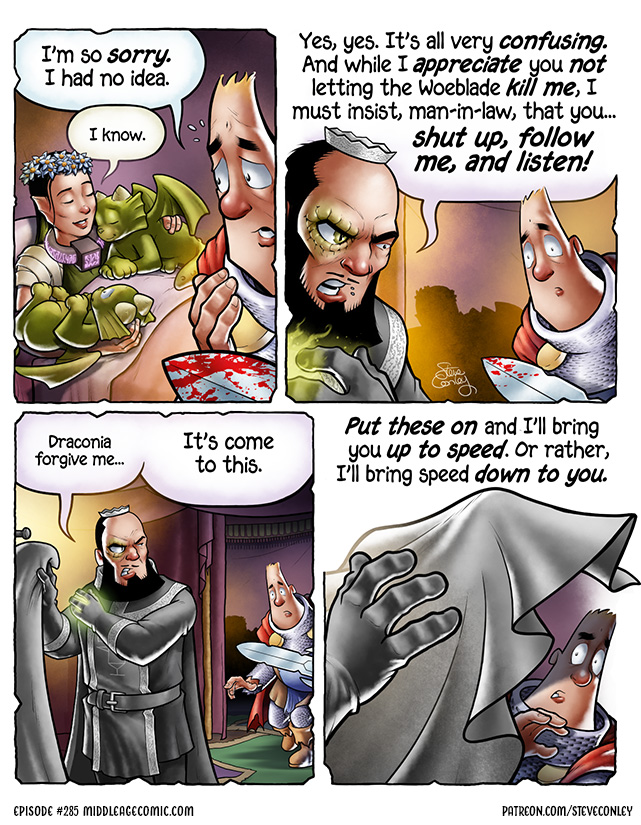 This was yet another case where I repeatedly tore up the page and started over.

In the previous version, I had “the king” begin explaining the backstory to Quimp while they all just sat there. Sure, the dragon snuggles are cute, but it meant having five characters (seven, if you count Maledicta and Bob’s occasional appearances) in a cramped space over many, many pages.

It was fine but it definitely felt stifling and visually uninteresting. It felt claustrophobic and I wasn’t happy with it. So I tore it up.

I ended up doing what I always seem to do when I hit this kind of impasse, we’re moving the plot forward and will overlap the backstory with what was going to have happened next.

I’m already much happier to have the characters moving.

And then, just before the episode went live, I felt the need to rewrite some dialogue. “The King” in panel three was saying something a bit too mean to Quimp. It was a pretty good joke/insult but, again, just too mean and not really in keeping with “the king’s” character. This version is better.

Shockingly, today (Monday July 18), is the 6th anniversary of The Middle Age! I can’t thank you all enough for your kind years of support!