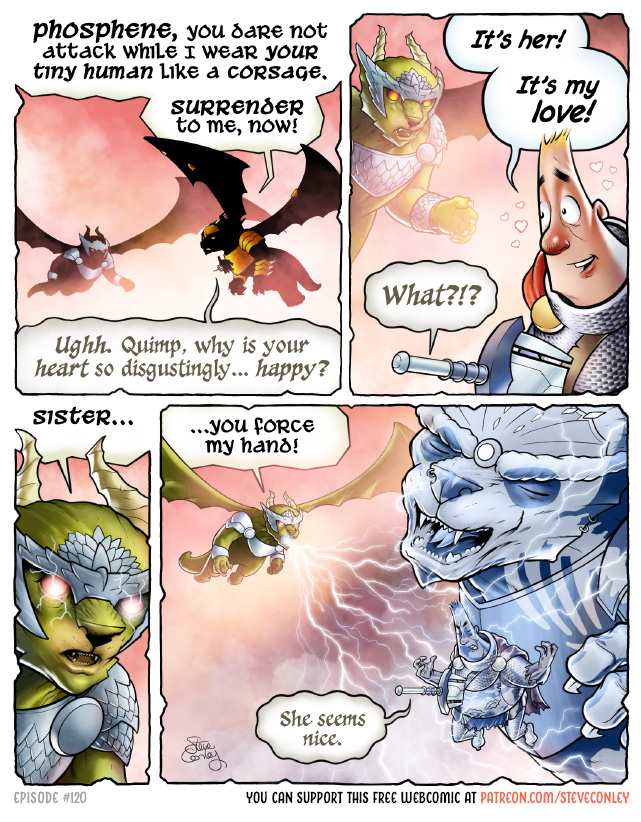 And 120 episodes in, we meet Quimp’s love! I almost sidetracked us with yet another subplot but I figured you all have suffered enough. :)

This week’s episode was delayed by a last-minute rewrite, and that rewrite was delayed by a last-minute veterinary visit for my editor/cat. My cat/editor, The Lady Sir Doris Persimmons Buttcake, is medicated, and doing much much better but I was unable to get a lot of revisions done while sitting in the vet’s office. I realllly need to rebuild my episode buffer – and I really need to quit being so fickle.

Somewhere in the chaos of putting this episode together, I decided Phosphene shouldn’t only breathe fire. To that end, I found myself drawing Sir Quimp’s and Empress Vesica’s skeletons – something I hadn’t expected. I reserve the right go back and draw Maledicta’s skeleton as well – once I consult with the Department of Cosmological Chicanery and Metaphysical What-Have-You to figure out what that might look like.

Extra thanks to this week’s new Patreon supporter Elizabeth!

BIG, BIG, BIG THANKS to my kind supporters on Patreon for helping our hero (and me) make it this far!