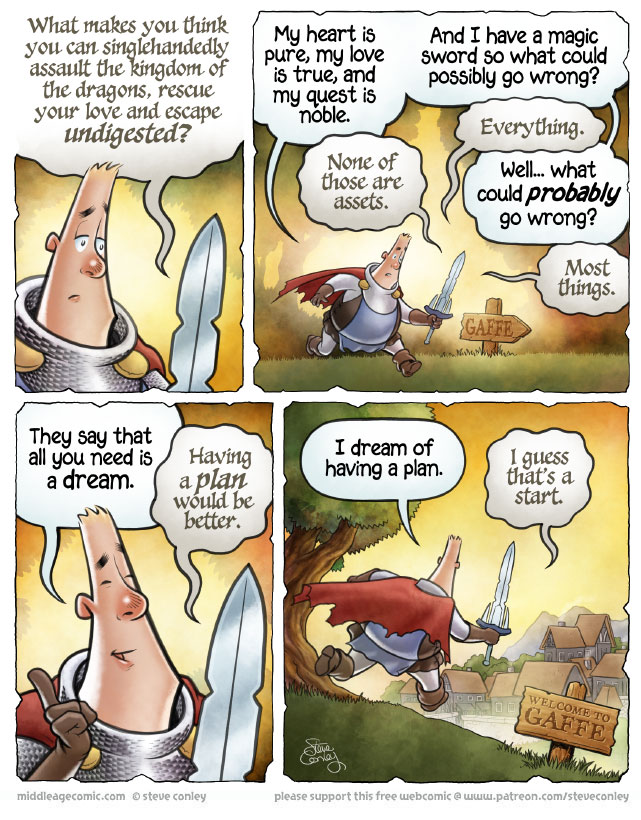 This wraps up the first chapter of The Middle Age. It was originally going to end at episode 24-ish but, like our hero, I follow my heart and am sort-of making this up as I go.

A friend of mine asked about the story and what plans I have for it. The “is this going somewhere?” question. After swearing my friend to secrecy via blood-oath, I explained the long-term story (summed up in Sir Quimp’s to-do list and hinted at with some of the non-sequential spot illustrations I’ve done) but I emphasized that my primary goal is to make the funniest, best-drawn comic I can every Monday. Having a long-term plan is great but each new episode is every bit as important if not a little bit more important.

When I was working on Bloop, I treated the project as a full graphic novel which I’d share a page a week. This meant that on some weeks not much happened because – while that particular page served a purpose in the story – it didn’t have a satisfying punchline or drama. Those were disappointing. Having learned from that, with The Middle Age, I’m trying to tell a continuing story at a gag-a-day (or gag-a-week) pace. The hope is that each episode feels complete unto itself but connects with larger story and hopefully doesn’t feel staccato or monotonous when binge-read.

Thanks for reading and sharing!