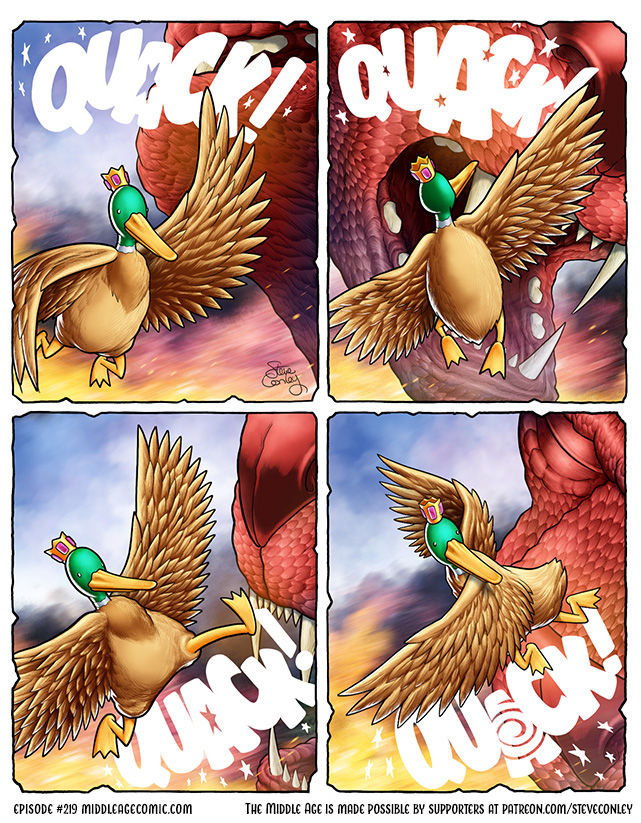 Yes, I spent three days making a comic page where a duck is punching and kicking a dragon. And the sound effect is Quack every time. It still makes me laugh. :)

This episode has the distinction – I’m fairly sure, correct me if I’m wrong – of being the first page which doesn’t have Sir Quimp in it.

When I started this serialized story, I felt it was a bit like Garfield, or Calvin and Hobbes, and it was important to have the main characters appear in every installment. It would reward returning readers and better introduce new readers to the story. And so, for 218 episodes, Sir Quimp has been on every page.

But if anybody is going to break the rules, it’s Waddlebottom.

I have to once again thank my supporters on Patreon again for their amazing support! As I was drawing this page, It struck me that most publishers would totally try to talk me out of a silly page like this one. They provide me the freedom to follow this silly story where it takes us.

And if you’re not able to support the story on Patreon, thank you for your kind comments and shares! It helps so much!