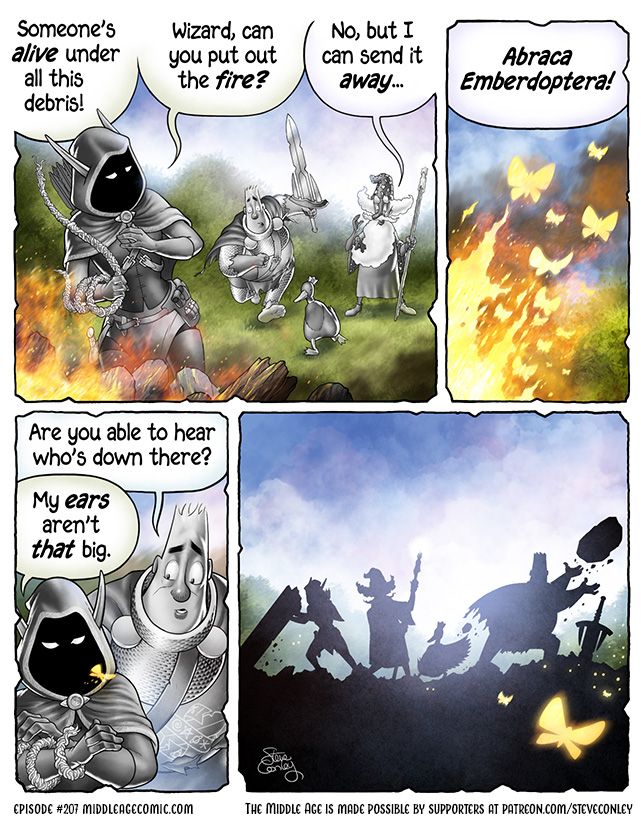 This is one of those episodes where I’m trying to accomplish quite a few things in four panels. The plot demands that our heroes start digging through the wreckage to rescue anyone trapped. This meant the characters needed their hands free, and the dragon fire to be put out. In a modern decompressed comic book, this could take a couple of pages, but we’re a webcomic, who has that kind of time? :) Dragons need rescuing and mysteries need unravelling!

Until early last week, Something’s bow was going to simply collapse into itself – but then I thought that it might be more in keeping with the snake design if it would slither around her arm. And though the twisty-snake-bow was a challenge to draw, I didn’t want to make it the focus of the page – the focus has to be the rescue. As for Melvwyn extinguishing the fires, I thought he might douse the whole area with water, but then this slightly more magical idea came to me.

And I also wanted to show that Something is a take-charge kind of character – solving problems before learning names.

Next episode: probably too much dialogue! I’ll try to make it fun. <3 Welcome to new Patreon supporter Scott!