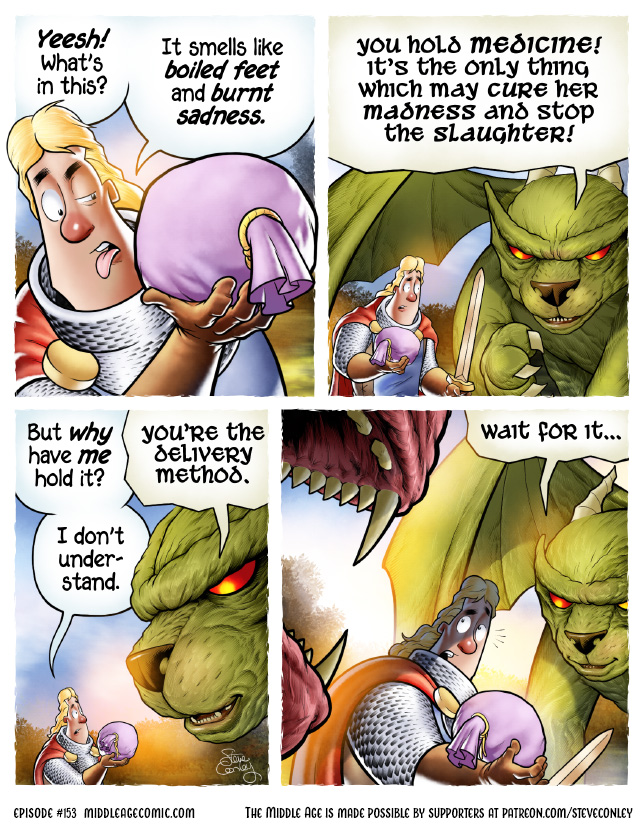 I’m slowly catching up after last weekend’s road trip so this episode was posted later than I’d like. I’m also getting used to the new Apple Pencil. It’s almost completely identical to my last one but I’ve spent 12+ hours a day for three years working with the old one so any difference is noticeable. The new pencil cap has a slight rattle and I would superglue it if it wouldn’t make it impossible to recharge. :) I know.

Thank you again for your amazing support and helping to make this silly comic possible!

Shop Talk: This episode – more than most – doesn’t stand alone all that well. Specifically, Phosphene doesn’t specify who the medicine is for. In past episodes, I’d have gone out of my way to say the medicine is for her sister – which existing readers would know but new readers wouldn’t. I think the story has now developed to the stage where I can (and probably should) focus more on the long-term readability, repeat readability, and the binging experience more than one-off introduction. That said, I’ll still work to make each episode mostly stand alone especially given the success recent episodes have had on Reddit and that the percentage of Earthlings who haven’t seen The Middle Age is still hovering around 99.9999999999%. I just don’t want Phosphene to keep saying “my sister” page after page. :)