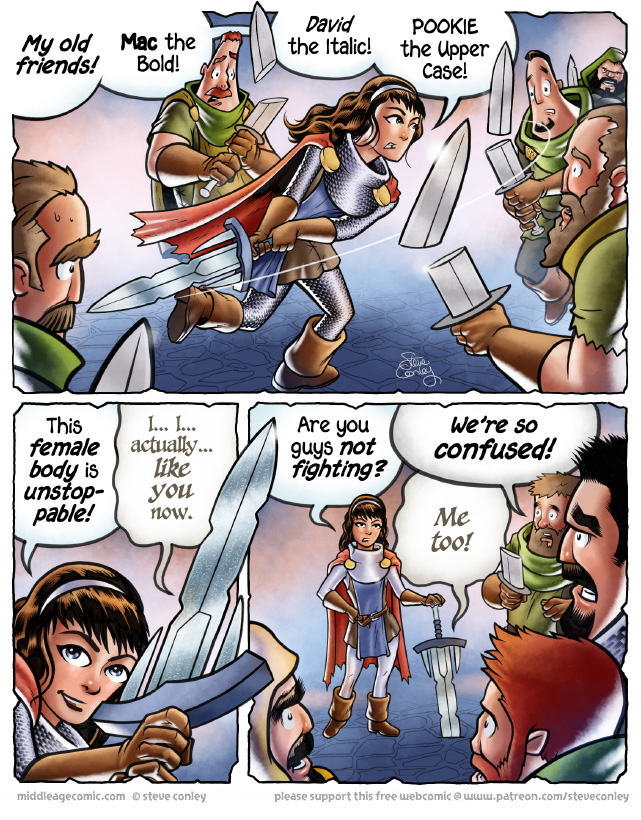 Special thanks to new Patreon supporters Macthe, David and Pookie! You each got a shout-out in this week’s episode.

In other news: Tomorrow marks the one-year anniversary for The Middle Age! I’ll post more about that here and on Patreon tomorrow!

Later this week, I’ll be heading to San Diego for Comic-Con and the Eisner Awards. I try to temper any optimism for the awards with the realization that the other nominees are fantastic and all of them have been working on their nominated strips longer than I. The Middle Age has gained many new readers thanks to the nomination and for that, I can’t thank the Eisner jury enough. I don’t have a booth or table at Comic-Con but I will be signing at the Exhibit A booth #1909 on Friday from noon to 1pm.

Later today, I’ll be posting this month’s Wallpaper for Patreon supporters of $3 or more. I’m adapting that promo image I created for the GoComics launch.

The deadline for the Ringo Awards has been extended until next week so there’s still time to vote for The Middle Age and myself in every category. :) http://ringoawards.com/