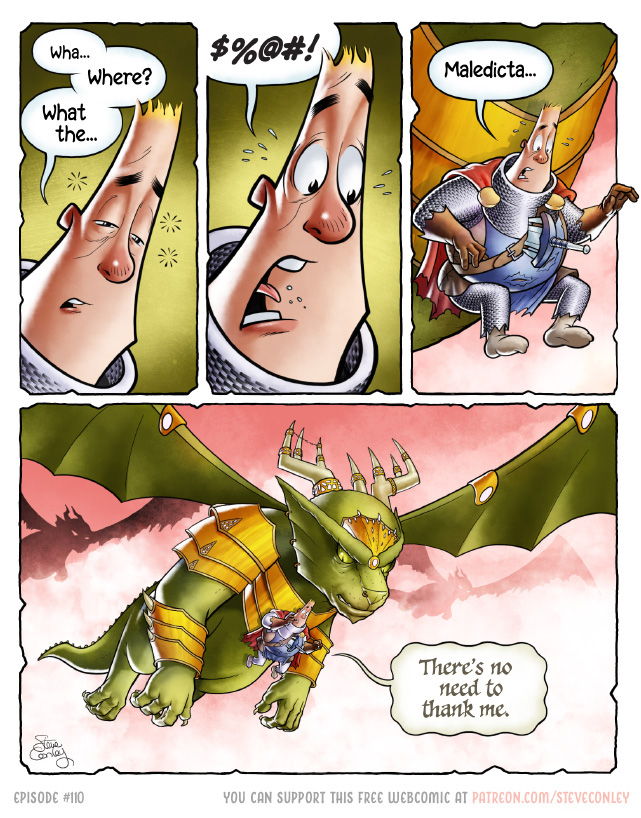 This week’s new episode is posted a bit late as I just returned from the Baltimore Comic-Con last night. The Middle Age didn’t win a Ringo award but I did manage to eat three crabcakes over the weekend, so I consider it a win.

Patreon‘s new Special Offer feature is proving to be very popular and we have many more supporters! It’s great news!

To recap, Patreon reached out me and a couple hundred other creators to try the system out. I was a little hesitant to have another crowfunding campaign on the heels of the Kickstarter, but I decided to take part for a few reasons – the main one being that it gave me a chance to send a thank you reward to all my existing patrons for their long support!

Every existing patron and every new Patreon supporter of $5 or more who signs up before October 10, 2018 at 10pm ET will receive the new reward.

The reward is a solid metal, die-struck pin of Sir Quimp’s logo and it will have an oversized backing card with every patron?s name incorporated into the background. Every name will appear on a book spine.

So, if you?re reading this and have been looking for one more reason to support me and The Middle Age, now?s the time!

And if you?ve been supporting me all along, thank you!!!