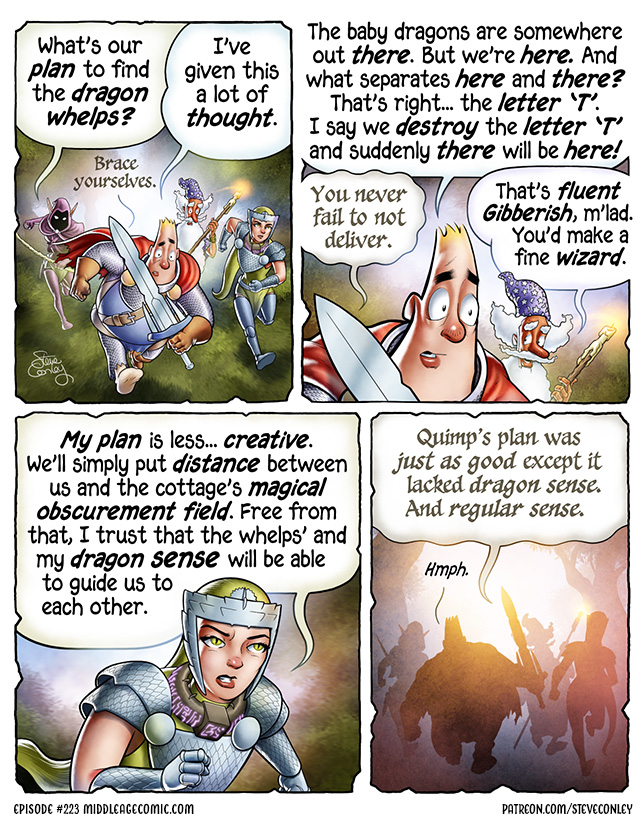 I wrote so many variations of Quimp’s Gibberish in panel two. I think I settled on the silliest. :)

Web site update: The Middle Age’s new web site is coming along. I did most of the work over the weekend but it still has a ways to go.

My favorite part of the new web site’s design is that the individual episodes are set to multiply – meaning they sit on the textured background like two transparencies on top of each other. (This is done with CSS – I’m happy to share the styling code if anyone’s equally obsessed with this sort of thing). This hides the hard edge around the rectangular JPG and lets the art (most of the time anyway), appear to float on the page. And it softens the colors on bright monitors. I created a glow in the background – something I did when designing the cover for The Art of Richard Thompson. This way, when the episodes lay on top of the background – they seem to glow a bit. I’m really happy with it.

And finally, after nearly four years, we have an Episode List. So if you want to jump to a particular episode, you can.

I still want to organize the episodes by chapter to make it easier for folks to re-read or catch up. Much to do!

Thank you all again for your kind support. <3