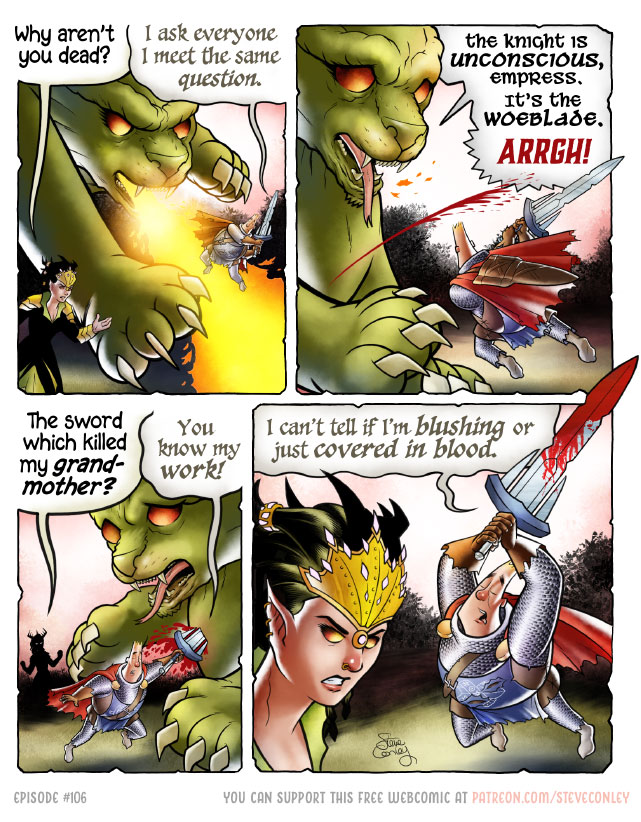 The Middle Age is made possible by supporters on Patreon

This is episode 106 of The Middle Age. You can read the story from the beginning here.

Our hero (or really, the Woeblade) hasn’t fought anyone for a while and it was time to return to the action.

Shop talk: Given the restrictions I’ve placed on the format (primarily, the two-row design), it’s really challenging to squeeze a giant dragon and human-sized characters into each panel and still have a variety of characters sizes and positions. I also, normally don’t swing the “camera” or the characters around so much but it seems to work in a combat scene. Also, drawing our hero fighting while knocked out is always a challenge but it always makes me laugh. 🙂

Kickstarter update: The campaign ended Wednesday and it was a tremendous success. In the end, a staggering 471 people backed the project! I’m floored by the response!

BIG, BIG, BIG THANKS to my supporters on Patreon! Thanks for making The Middle Age possible.

Thanks to everyone for reading and sharing! 🙂